Wandering through town the other day I was surprised and delighted to see a man sitting behind an old fashioned typewriter and a sign declaring, ‘POEMS on (almost) anyone or anything’.  Of course I couldn’t resist going and talking to him!

He told me that he writes the poems requested and then people can pay as much as they like for them.  I (rather rudely) asked him if he makes money as a poet and he said he does, which I thought was pretty impressive because I think I remember reading once that even the most popular modern poets only sell a couple of thousand copies of each of their books.  At any rate, I asked him to write a poem on why poetry is important and about half an hour later I received this rather lovely little verse.  (I paid him £5.  Do you think that’s fair?)

Poetry is important, by Stefan Kielbasiewicz

Poetry is not important
because of Shakespeare 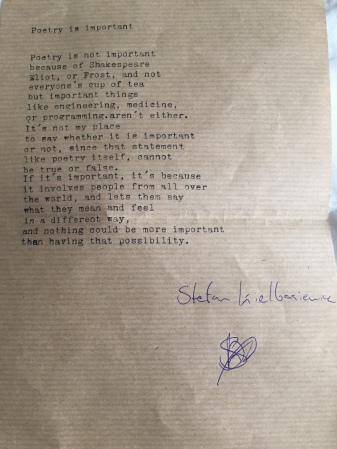 Eliot, or Frost, and not
everyone’s cup of tea
but important things
like engineering, medicine,
or programming aren’t either.
It’s not my place
to say whether it is important
or not, since that statement
like poetry itself, cannot
be true or false.
If it’s important, it’s because
it involves people from all over
the world, and lets them say
what they mean and feel
in a different way,
and nothing could be more important
than having that possibility.

So there we go.  This is for all my students who’ve ever asked, ‘but what’s the point of poetry?’  I hope you like it as much as I do!

Do go and find him – he was on Parliament Street last week though I don’t know if he’s always there.  And buy a poem!

He’s on Facebook at this link, or you can search streetpoetryyork (with no spaces, just like that) to find him.

Published by Things We Say In The Silence

View all posts by Things We Say In The Silence